Are You a Good Observer? Check Your Ability

So have you counted correctly? have you spotted the monkey? most probably not right... :). Don't worry, there is nothing wrong with you, but it is the way in which our brain works.
This is caused by a phenomenon called "inattentional blindness". This phenomenon is extensively investigated by by Daniel J. Simons, who is a professor in the Department of Psychology and the Beckman Institute for Advanced Science and Technology at the University of Illinois.
In his personal website he defines it in the following way: 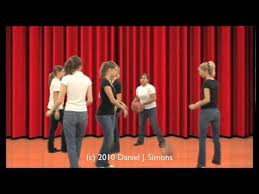 "When people focus on a task that demands their attention, they often fail to notice unexpected objects and events that occur in full view. This phenomenon is known as "inattentional blindness" because people typically do not consciously perceive aspects of their world that fall outside of the focus of their attention. These events can be dramatic enough that the vast majority of people are convinced that they would notice. In reality, though, many people do not."

He and Christopher Chabris asked the subjects to watch and follow the instructions. Their findings show that only 50% identified the gorilla(even-though 90% think that they can spot the gorilla). Their work includes the investigation of some of the factors that cause this variation.