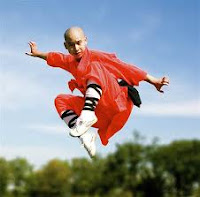 
Shaolin Kung Fu is a collection of Chinese martial arts that might have  affiliation with the Shaolin Monastery. Some of the different styles of kung fu and wushu are actually related to Shaolin temple. Due to the loss of records during the 20th Century Cultural Revolution, it is very difficult for a particular style to conclusively establish a connection to Shaolin temple.

Bodhidharma (Bodhidharma, a Buddhist monk from South India) at Shaolin:

Some say that due to the poor physical shape of the Shaolin monks, Bodhidharma instructed them to practice these techniques to maintain their physical condition as well as meditation techniques for the good mental condition.
He is said to have taught a series of external exercises called the Eighteen Arhat Hands (Shi-ba Lohan Shou), and an internal practice called the Sinew Metamorphosis Classic. After his departure from the temple, two manuscripts by Bodhidharma were said to be discovered inside the temple: the Yijin Jing (易筋經 or "Muscle/Tendon Change Classic") and the Xi Sui Jing. Copies and translations of the Yi Jin Jing survive to the modern day and the Xi Sui Jing has been lost.